Life lessons from The A-Team

I wonder if any of the Apostles could be nicknamed ‘Faceman’?

A few weeks back while watching “The A-Team” I got one of those mini revelations that God sometimes gives us. Much like the life-view He gave me one day while picking weeds, this one came right out of nowhere.

At the end of the 2010 movie, Bradley Cooper’s Templeton Peck, aka Faceman, devises a plan to capture the bad guys and clear the team’s name. As he describes it to Hannibal, BA and Murdock, he says the key to it is “Distraction, Diversion & Division”.

During his explanation there were grand explosions, gunfire and pyrotechnics. This is a very low budget blog, so you’ll be getting none of that here.

But it hit me that using those very same tactics is how Satan comes after us each and every day.

When we look at the things we do that eventually turn into sin, don’t they all start with some kind of small distraction? Maybe it’s a comment, a picture or some innocent happenstance that gets us to stop looking at God and wondering, “What the heck is going on here? I think this needs fixing.”

It wasn’t much different in the Garden of Eden when Eve saw the fruit from the Tree of the Knowledge of Good & Evil.

Now the serpent was more crafty than any of the wild animals the Lord God had made. He said to the woman, “Did God really say, ‘You must not eat from any tree in the garden’?” The woman said to the serpent, “We may eat fruit from the trees in the garden, but God did say, ‘You must not eat fruit from the tree that is in the middle of the garden, and you must not touch it, or you will die.’” “You will not surely die,” the serpent said to the woman. “For God knows that when you eat of it your eyes will be opened, and you will be like God, knowing good and evil.” ~ Genesis 3:1-5

Satan planted the seed with what may have appeared as a fairly simple question. And even at that point, like many of us today, Eve still knew what was right and what was wrong. She quoted right back to him what God had told her and Adam, only to have Satan deepen the distraction by assuring her that God just didn’t want her to be like Him.

Now we don’t know where this whole conversation took place. Seems like every time we see it in a movie that the serpent and Eve are standing right at the tree. That may be the case, but we just don’t know. But it doesn’t seem to me that at this point Eve was looking at the fruit or had even seen it. But that was about to change.

When the woman saw that the fruit of the tree was good for food and pleasing to the eye, and also desirable for gaining wisdom, she took some and ate it. She also gave some to her husband, who was with her, and he ate it. ~ Genesis 3:6

So once her attention wasn’t fully on God, Satan got her looking at the actual item. He progressed the temptation from a distraction to the diversion. This is why I think their initial conversation may not have taken place at the tree, as Eve seems to have not been fully thrown off course by the question itself. But the sight of that fruit, whatever it was, seems to have been the tipping point for getting Eve to sin.

How many times have we been tempted by something, knew it was wrong, and ended up going to take a look at it just for the sake of seeing it? And when we get there we suddenly find we’re hip deep in whatever it was we were going to steadfastly avoid, before we even know it?

But for Satan to get us where he wants us, he needs to get us off by ourselves and way from God.

Then the man and his wife heard the sound of the Lord God as he was walking in the garden in the cool of the day, and they hid from the Lord God among the trees of the garden. But the Lord God called to the man, “Where are you?” ~ Genesis 3:8-9

The tree gave Adam and Eve the knowledge that they had done wrong as soon as they had eaten the fruit. And they knew that God was going to come looking for them and they hid. Satan had converted the final leg of the triangle – Division. And it is that division, that sin, that each and every one of us has inherited from that day forward. It’s part of our nature and it’s that trait that we must fight every day as we walk with God.

Fortunately, God knew ahead of time what was going to happen and had planned in advance how He would redeem the world to Himself. He knew the cost would be high and that more would reject it than those that would accept it, but He did it anyway.

That cost was the pain, suffering and eventual murder of His Son, His only Son, Jesus Christ, on the cross at Calvary.

As we walk through this life we must be careful what we put before our eyes and ears, as what goes in them can lead us to become distracted. And that distraction can lead to the diversion and division that draw us away from the relationship that God wants to have with us.

When we follow God in our daily walk and eventually arrive at Heaven’s gate, He’ll greet us with open arms and say, “Well done my good and faithful servant.”

And God and the angels will rejoice because they love it when a plan comes together!

Who Can It Be Now? 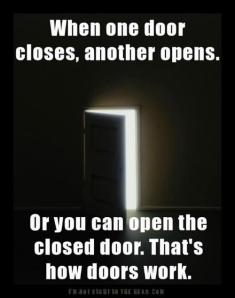 A friend of mine posted this on Facebook today and while I got the joke, it suddenly made me think, “Why do we let doors get shut on us?”

I mean, yeah, there are times when God closes a door on us for own good. But what about when we hear His voice and let someone else close the door on us? What should we do then?

I’m writing this totally on the fly and the first story that comes to mind is that of Joshua and the Battle of Jericho. Joshua is one of the members of the “Hall of Faith” because it would take a huge amount of it to go against a superior army without weapons and by just walking around the city walls for six days and then blowing trumpets on the seventh to win the day.

But Joshua fought the ideals of the conventional warfare of the day and his own thoughts and trusted God. Much like our Pastor Grady Jones said a few weeks back, Joshua had to have taken any thoughts contrary to the word of God captive and decided that he was going to do it God’s way.

In the summer of 1999 I was in quite a predicament. My family and I were living in Redlands, Calif. where I had lost my job ion May due to budget cuts at California Baptist University. I had applied for a position as a sports editor at a paper in Anderson, Indiana and was hoping I’d at least get a phone interview. I finally did and then to my surprise they asked me to fly out for a final interview. Evidently it was down to me and one other candidate.

The interview went great and when I got on the plane to come home, I knew God was giving me that job. A week later I got the call from the managing editor informing me that had chosen the other guy. I said thank you and we hung up.

I was devastated. To that point in my life I had never felt more certain that I had heard God’s voice distinctly telling me something. I could feel it in my very soul and here I was standing on the outside looking in. I decided in that moment that I must have been mistaken and tried to move on from it, but every time I settle down to pray the words kept coming back, “That job is yours.”

Two weeks later the managing editor called me back and asked if I wanted the job. I said yes and asked what happened. He was reluctant to tell me, but finally did. He said that the gentleman they had hired showed up on a Monday and filled out all of the requisite paperwork. But when he came in the next day, he said that he really felt God was leading him to do ministry work in his off hours and that he had to do it in another place. He quit and left and then they called me.

As I hung up the phone I remembered God continually telling me, “That job is yours” and I remember how foolish I felt for not having trusted God all the way.

When doors close in front of us, as Christians we need to examine our calling and ask God, “What’s up?” It may not be that He doesn’t want us going a certain direction, it just may be that He wants to test us to see where we are in our faith and remind us of who He is.

Many times when one door closes another one opens. But when another doesn’t seem to be available, it’s probably a good idea to check the knob on the one we just came out of.